“The opposite of racist isn’t ‘not racist.’ It is ‘anti-racist.’ What’s the difference? One endorses

either the idea of a racial hierarchy as a racist, or racial equality as an anti-racist. One either

believes problems are rooted in groups of people, as a racist, or locates the roots of problems in

power and policies, as an anti-racist. One either allows racial inequities to persevere, as a

racist, or confronts racial inequities, as an anti-racist. There is no in-between safe space of ‘not

― Ibram X. Kendi, How to Be an Antiracist

I was sitting in an anti racist training the other day, a 101 – anti racism for beginners, and the trainers opened us with the question “when was the first time you noticed the impact of your race?” This was a training with about 54 people in it, all committed to racial justice in the homelessness service provider field, all leaders in their respective communities in this work. We each had one minute to answer the question.

I began to notice the answers of the white folks in the room, and how they had this commonality throughout them, this underlying thread that tied together the first and deepest struggle of white people in the work anti racism. Every answer was some variation of “the first time I noticed was when I went to a school, moved into a neighborhood, had a friend” who were Black, Indigenous, or People of Color and that “they had less…” or “they didn’t have access to…” and, and, and. It seemed the answer to “when was the first time you noticed the impact of your race” was singularly tied up in the first time they noticed the disenfranchisement, marginalization, lack of access, and oppression of others.

And that starting point roots the lens of race/racism/white supremacy not being about whiteness.

Hold on, I know some of you out there are like, “great another white person trying to center whiteness.”

But here’s the thing, until those who have come to be known as white are able to understand the impact of the construct of whiteness in relation to the systems and structures that define US culture, governance, economics, and access, dismantling those structures will be impossible.

An example, if I may. I grew up with a pretty deep understanding of race. The first time I remember speaking out against racism, I was 8 years old. I grew up in Dallas, TX as a mixed-race child at a time when my identity had not yet been racialized (see- 9/11), the most I understood putting up with was kids on the playground calling me a “terrorist” and always the laughter at – and mispronunciation of – my name. I’ve grown to recognize the microaggressions started earlier than that, but blissfully (and thankfully) I wasn’t overtly aware. But as someone who is both white and not white, not a fraction, but a person with a multiracial and multiethnic background, I was exposed early on to understanding interpersonal racism. I would have told you that this was the first time I understood the impact of my race, within a mixed family living in the heart of Texas. And perhaps that is true, perhaps those were moments in which I recognized the impact of my race.

The first time I recall recognizing the impact of my whiteness, however, came to me later. When my best friend and I were young (we met at 12), we – like many pre-teens in the 90s – frequented places like the mall and beauty supply stores. Anyplace we could find to wander about on the 583 bus route, you would find us there. And we (actually, I) discovered that when we went into stores like Claire’s or the Icing, or to the beauty supply stores for dollar lipsticks, earrings, and nail polishes, she would be followed by the proprietors of the stores – which allowed me to steal. We would roam the aisles and while she was being followed, I was lifting.

This is where the framing matters for white folks engaging in anti racism work. This experience can be remembered and told as- “the first time I remember noticing the impact of my race it was when my Black best friend was followed in stores and I wasn’t.” But the true impact of my whiteness was, I could steal because they weren’t following me. Perhaps this seems a small distinction of semantics, but it is truly the crux of beginning the action of white anti racism.

White folks liberally focus the ideas of white supremacy and racism as being a “Black, Indigenous, or Person of the Global Majority” problem. This framework will halt the progress of your anti racism

Maybe you are familiar with social media and have seen this meme going around: 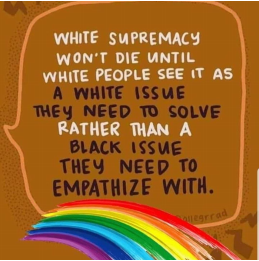 Which was born from this tweet by Dwayne Reed (and not credited):

It reads: “White supremacy won’t die until white people see it as a white issue they needs to solve rather than a Black issue they need to empathize with.” The first step in identifying white supremacy as a white issue is born in understanding whiteness as a construct at all. The framework for white folks who are truly working to become anti racist must be born from understanding how their whiteness impacts their every step. Seeing in the first place that your – our – whiteness actually carries impact.

You’ll note in my example above, that I said “we (actually I) discovered)” because she already knew at the age of 12 the impact of her Blackness in those spaces. She knew she would be followed, she anticipated it, she was warned by her mother even before that age that this would be what she should come to expect and how to “act right” (act white) in spaces for her very safety.

And within the “discovery” that she would be followed and I wouldn’t, we capitalized on it, and I was literally allowed to steal.

The impact of my whiteness was clear as day.

When we frame our ideas of race around its impact on those not of the dominant and oppressive culture of white supremacy and not on the roles we play implicitly in that culture, we continue to put the expectation of dismantling it on those we have “othered.”

Part of beginning to process through whiteness becomes understanding that as long as we decide to take no responsibility, we pretend we owe no accountability, and we allow ourselves to shrug and say “well, that’s just the way things are” and “I have no control over this” and we assuage our guilt. Because once you have become made aware of white supremacy culture, it becomes something you cannot unsee. And without the constant work of understanding how our whiteness, our power impacts our every interaction and access and spaces we occupy, we allow ourselves to spin off into it not being our problem.

It is true, to be clear, that your whiteness (hell, my whiteness and brownness) are accidents of birth. But that cannot be the end of your exploration into this. If you’re here, it’s because you’ve gotten into the idea of anti racism.

But if your anti racism is an adjective and not a verb, then you are a racist.

And if you don’t want to be a racist, well. That’s a lifelong action. And if you find yourself overwhelmed, and you don’t know where to start. Start here. Start exploring honestly the impact of your race. Build the muscle. Try reflecting – once a day even – on how your race impacted that meeting at the office or that interaction at the store. And do it every day. And build yourself toward a future where you don’t have to try anymore and you see with clear eyes the impact of whiteness in your own backyard.

And then begin to dismantle.

You don’t have to do it alone. In fact you can’t, but that’s another dispatch on a different day.

View all posts by rhieinnon